As the British would say, a side-by-side refrigerator is exactly what it says on the tin: a refrigerator in which the chambers for frozen as well as fresh food are side by side to one another, rather than one stacked on top of the other. When it comes to refrigerators, side-by-side is the style that is probably the middle of the road; less traditional than a top-freezer model but less contemporary than French door or door-in-door models.

GE Profile Side by Side Refrigerator: Frequently Asked Questions

With all the various styles and designs of refrigerators on the market today, it is easy to become overwhelmed when shopping for a new one. Here are some questions consumers frequently ask about side-by-side refrigerators in general and the GE Profile series in particular.

1. Who is most likely to benefit from buying a side-by-side refrigerator?

2. Are the doors/cooling chambers of a side-by-side refrigerator the same size?

Not typically, no. The two chambers of a side-by-side refrigerator are usually not created equal; that is, rather than dividing the interior space evenly between the two compartments, there is usually a little more space allotted to the fresh-food chamber at the expense of the freezer compartment.

3. How is the freezer in a side-by-side refrigerator different from top freezer or bottom freezer models?

However, the trade-off is that the freezer compartment is more narrow, meaning that you may have trouble fitting things like wide trays, large frozen turkeys or even frozen pizzas in the freezer chamber. Because many side-by-side units also include ice and water dispensers, these components take up room that could be used for storage.

4. What are some specific desirable features offered by side-by-side refrigerators?

Even with extra features, side-by-side models tend to be moderate in price; on average, they can cost approximately $2,500 less than a higher-end French door model.

5. How much capacity do I need in a refrigerator?

It is estimated that 4 to 6 cubic feet of storage space (including both chambers) for each member of your household is sufficient. Therefore, it is estimated that a refrigerator with a total interior capacity of 28 to 29 feet could adequately accommodate a family size of 5 to 7 people.

Consumers are advised against buying a refrigerator that is larger than their household size requires as the larger the refrigerator, the more energy it takes to run it and the higher your electricity bills will be.

6. What color options are available in the GE profile series?

Color options in the GE Profile series are limited to two: stainless steel and black stainless.

7. What specific features are available in all GE Profile side-by-side refrigerators?

The features common to all side-by-side models in the GE Profile series include the following:

Of note, while the entire series tends to be relatively energy efficient, not all models are Energy STAR certified.

8. How many models of side-by-side refrigerators are available in the GE Profile series?

Currently, there are six models of side-by-side refrigerators in the GE Profile series, which also includes other types of refrigerators, available for sale on the GE website. There are a number of other models that have been discontinued. The six that remain will be rated and ranked in this review.

In order to rank the six side-by-side refrigerator models available in the GE Profile series, we looked at four criteria:

When it comes to rating the criterion of capacity, more does not necessarily equal better. We judged each refrigerator's capacity based on what would be sufficient for a household of four.

With the ideal capacity for such a household being approximately 20 to 25 cubic feet, we ranked the refrigerators that fell within that cubic-footage range higher than those that exceeded it. Keep in mind, however, that if you are buying a refrigerator for a larger household or group of people (an office with many employees, for example), increased capacity is a positive in your situation rather than a negative.

The retail prices for the side-by-side refrigerators range from $2,000 to $8,600. As we shopped around, however, we found some stores were selling them below the retail price.

Interestingly, the prices are not spread evenly over a wide spectrum. That is, there are four models priced under $3,000 and two priced over $8,000. The two models priced over $8,000 are built-in models, which means they are intended to configure seamlessly into your kitchen space rather than be freestanding. In other words, the higher price of these two models is justified, but they almost certainly exceed the needs of the average purchaser.

When making a major purchase such as a refrigerator, it may be important to determine your needs versus your wants and give priority to the former. You may really want a side-by-side refrigerator with a built-in configuration rather than a freestanding model, but if your available budget is small, the extra cost just is not practical.

We thought about creating a top five list for the models in this series, but since there are only six altogether, we decided that it did not make a lot of sense to leave one out. Since they are all part of the GE Profile series, the refrigerators on this list are identified by their model numbers. 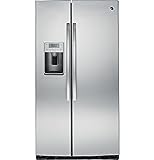 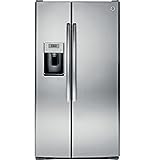 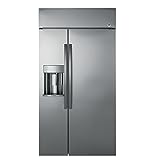 GE Profile PSB48YSKSS 48" built-in Side by Side Refrigerator in...
Shop now at Amazon.com

Where To Buy: AJ Madison, Home Depot, Abt, JC Penney 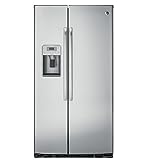 Ranking these six models of GE Profile side-by-side refrigerators was a challenge for several reasons. In some instances the specifications between models were so similar that it was hard to draw a distinction; a criterion like total capacity can be either a strength or weakness, depending on the size of your household; and the built-in models are different enough from the freestanding models that it was difficult to find any basis of comparison.

Therefore, in addition to choosing the Best Overall model, we have also chosen the Best Value in a Larger Capacity and Best Built-In Model.

It was a close race between the PSE25KSHSS and its closest competitor, the PSE25KBLTS. These two related models each have a moderate total capacity of 25.3 cubic feet, similar energy efficiency, identical warranties, and very close customer ratings.

Ultimately, what pushed the PSE25KSHSS over the edge was cost; both the retail price and the cost per cubic foot were slightly better than the PSE25KBLTS, but we believe either to be an excellent value.

If you have a larger household, however, then a 25.3 cubic foot refrigerator is not going to be the best value for you because it will not be able to hold enough food. For those who require a total capacity of over 25 cubic feet, the PSS28KSHSS offers the best value for the money.

At a retail price of $2,299 for 28.4 cubic feet, the cost per cubic foot was actually a slightly better value than the Best Overall pick, $80.95 versus $82.95 per cubic foot. Of course, the PSS28KSHSS is a larger refrigerator that is not Energy STAR qualified, so the upfront savings may be counteracted by the increased energy costs over the life of the refrigerator. However, if you require the extra cubic footage, this is the one for you.

If you have your heart set on a built-in model and are prepared to pay the extra $3,000, the PSB42YSKSS is the better pick over its competitor, the PSB48YSKSS. Our pick, the PSB42YSKSS, costs less overall and has a more favorable total capacity based on the judging criteria we established at the beginning.

Its competitor, the PSB48YSKSS, cost less per square foot but scored lower in energy efficiency. Ultimately, the deciding factor was customer ratings; our pick scored a whopping 4.5 out of 5 stars compared to the competition's 3.9 out of 5. Once again, however, if you require a total capacity of more than 25 cubic foot, you may want to consider the PSB48YSKSS as well.

As a participant in the Amazon Services LLC Associates Program, this site may earn from qualifying purchases. We may also earn commissions on purchases from other retail websites.